Magnetic particle Inspection (MPI) is a non-destructive testing (NDT) process for detecting surface and near-surface discontinuities in ferromagnetic materials such as iron, nickel, cobalt, and some of their alloys and is primarily used for crack detection. The specimen is magnetised either locally or overall, and if the material is sound the magnetic flux is predominantly inside the material. If, however, there is a surface-breaking flaw, the magnetic field is distorted, causing local magnetic flux leakage around the flaw. This leakage flux is displayed by covering the surface with very fine iron particles applied either dry or suspended in a liquid. The particles accumulate at the regions of flux leakage, producing a build-up which can be seen visually even when the crack opening is very narrow. Thus, a crack is indicated as a line of iron powder particles on the surface.

The method is applicable to all metals which can be strongly magnetised – ferritic steels and irons, but not generally austenitic steels. 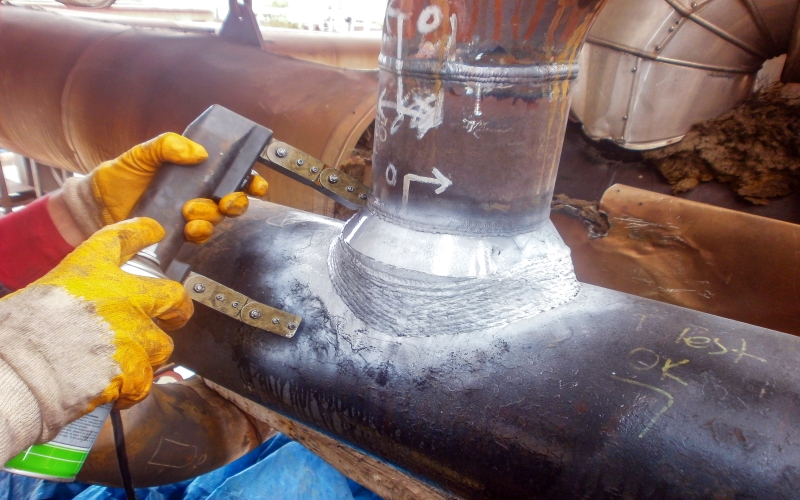 (Example of a Magnetic Particle Inspection)

The method of magnetisation must produce a magnetic field with lines of force at a large angle to the expected direction of the cracks to be detected, so that it is usual to apply the magnetisation more than once in different directions, for example in two directions mutually at right-angles, but methods of swinging the field direction during magnetisation are available.

The magnetisation may be produced by any of the following methods:

There are several types of electrical currents used in magnetic particle inspection. For a proper current to be selected one needs to consider the part geometry, material, the type of discontinuity one is seeking, and how far the magnetic field needs to penetrate into the part. The electric current used may be DC or AC of any waveform, but the current required to produce adequate magnetisation depends on the waveform of the supply, the magnetisation method used, and the material of the specimen. It is most important to ensure that the current used is correct for the specimen size and shape and also that the direction of the magnetic flux produced is suitable for the cracks expected.

By using a combination of two magnetic fields, a swinging or rotating magnetic flux can be produced, which will detect a crack in any orientation.

Usually the iron particles – dry powder or suspended in a liquid (magnetic ink) – are applied while the magnetising current is still flowing, but residual magnetisation is sometimes used, when the particles are applied after magnetisation. Some steels retain sufficient magnetisation for this method to be satisfactory, and in this case smaller, more portable, magnetising equipment can be used. Magnetic inks (particles suspended in a liquid) are used more widely than dry powders. They are applied by low-pressure spray, dipping or brushing; it is important to use plenty of ink and to allow time for the particles to flow over the surface and migrate to any cracks. On dark surfaces a very thin layer of white paint can be applied to give a higher contrast indication.

Fluorescent particles, which require UV-A illumination, are widely used and coloured particles are also available. The indications of cracks can be preserved by photography or by the use of peel-off transparent adhesive film. MPI methods can be applied to relatively rough and dirty surfaces, but the flaw sensitivity may be impaired. Magnetic methods for underwater applications have been developed. Only under very special conditions can sub-surface flaws be detected by MPI.

The following is a generic step by step method for inspecting a carbon steel fillet weld; 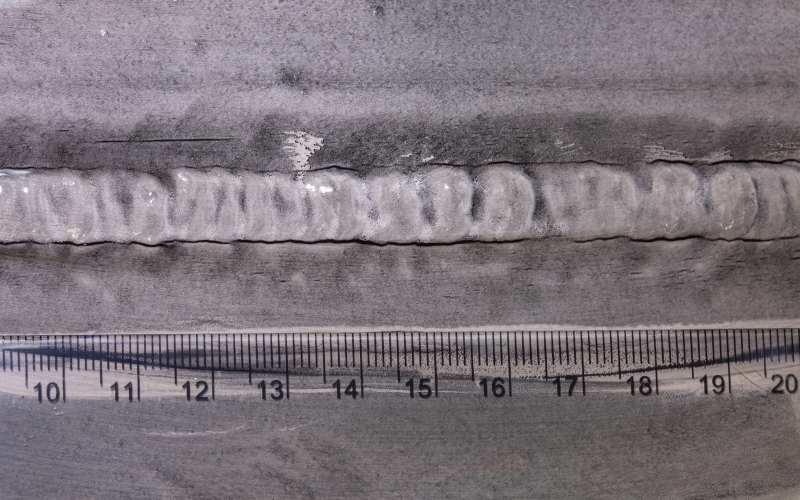 (Example of a Crack on a Carbon Steel Butt Weld)